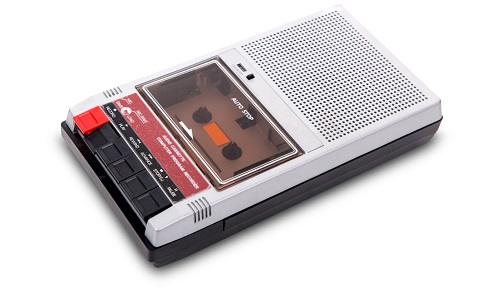 Those of us that weren’t born in the iPod era used to have physical music and movie media like cassette tapes, vinyl, CDs, minidisc, VHS and almost Beta Max. The idea was that you could take this media and play it on any compatible player and in some cases record too. Ok, I know the concept is almost the same with digital media, but there is something nostalgic about physical things.

Focussing on the mighty cassette tape, the medium that young teenagers used to woo their targets with heart felt mix tapes, it was possible to buy cassettes of different record time lengths and different materials for quality. Cassette decks were integrated in to boom boxes, Sony Walkmans, all in one HiFi units and of course, the more quality HiFi separate devices along with supposed studio quality devices. To give it some more background, these devices would have support electronics like headphone amplifiers, graphic equalisers, high speed dubbing (for fast transfer between decks), microphone amplifier circuits and even motorised loading and eject mechanisms. See the vague similarity between this and networking? No, I thought not. The cassette much like interchangeable networking components is removable. It’s transportable and although the tape material, cassette housing and tape lengths were variable, the end result was audio could be recorded and played back. A cheap cassette played on a high end player and an expensive cassette played on a cheap player. A time of bliss!

With the networking community wanting open interfaces between components and frameworks like MANO needing consumable reference point standards, the ideal end point is that of swappable components that implement this ‘openness’. This gives the consumer lots of power. Imagine being able to swap out a MANO VNFM for another because of support issues, or one virtual switch for another without breaking sweat due to a bad source code language choice (think performance and support over personal preference). This is what the networking world continuously talks about and it sounds blissful doesn’t it.

Most of these conversations revolve around customers and consumers, but what about the vendor, distribution and skill sets that create this tech? These companies ideally need to stay in business to continue supply of service. So how do vendors achieve stickiness in the elysium open ecosystem? Generally, the sales methods change, the marketing is designed to confuse the buyer and strike change avoidance in to the heart of decision makers and once most of your design is provisioned and (mostly) working, it’s a lot of effort, risk and potential embarrassment to change technology components out.

Values of the survivors and victors

In order to survive the current market sweep, the qualities to look out for will be these:

So many companies exist that fail when it comes to delivering their product. Whether that product is a physical item or consultancy, it doesn’t matter. Well known software companies have been guilty of the “It’s yours now and your money is ours. Deal is done. Should have done your homework” style speeches. That’s beginning to stop as transactions and company revenues become monthly. It’s easy to break out of a low cost monthly commitment, not so easy to return your CRM software.

Those companies that understand your business, carefully and energetically align their technology with your requirements, stand a reasonable chance of successfully navigating the open seas. With regular small successes, relationships grow and flourish and this adds to a healthy working relationship.

Is it possible to nail a product and never update it? Toilet roll hasn’t changed a whole lot since it’s conception. Sure, you now buy it with aloe vera, but it’s the same. The three shells could threaten toilet paper (if the film technology ever comes in to existence), but this is almost promise theory.

As business requirements and technology capability continually changes, so do the feature bindings on networking hardware, virtual network appliances and individual functions that could be presented in a service chain. These features and capabilities are then required to be aligned with the businesses that want to consume them, resulting in regular updates to software. Those that regularly update are less likely to fudge something up and are used to packaging, testing, releasing and handling bugs and errors.

How about consuming the new feature or binding? Well, you need great documentation for that. In the millennial world, that also might be a YouTube video or two.

iii) Open-ness – speak loud and real without the BS

It is easy to reach a point where you forget how many times you’ve been lied to, who by and why. Quickly becoming defensive and cynical, technology and the adoption of it directly suffers. Code could become worse as product managers lash out grabbing crazy ideas to force adoption. Not all technology businesses have stacks of currency banked and those that are public have investor responsibilities with quarterly financial announcements that can trigger investors to tear the company apart from the inside.

Companies that are brave and take the transparent route may find it harder for initial adoption, but the long term gains of sharing the ‘warts and all’ could be the success factor for product selection and an on-going healthy relationship.

iv) Investment in to the open community

This one is probably the most misunderstood and ‘$.washed’ of all. What is a community? Tom Hollingsworth hit the nail on the head whilst at the HPE event this year in London. A community in the eyes of those who refuse to operate differently in the open world is a free set of developers and support staff. “Join our community….because it’s cheap for us”. Some products are super useful due to their build in abstraction capability. It’s down to the user to apply the product with scripts or DSLs. Communities are important here. The transfer of knowledge is important too and community events cost real money and not recognition. Full time paid developers, paid for community events and infrastructure are all signs of commitment to the movement.

The industry moves forward in leaps due to healthy competition and technology developments. Almost an unwritten rhythm, a beat that pulses in the whole industry.

No one likes a sore loser and no one likes to hear one vendor crapping all over the other in front of customers. Businesses are in trade because they offer consumable and accessible services. It’s not to say that bad technology doesn’t exist, because it does. Even bad technology serves a purpose for someone somewhere. It could be really embarrassing when the customer throws you out of a meeting for talking down a product they’ve bought from a competitor. It questions their credibility, purpose and even worse. destroys relationships that may not be repairable.

The cassette died due to CDs. CDs were at risk by MiniDisc (some would argue that’s total rubbish) and all of these were usurped by digital files. Humans globally invested hundreds if not thousands of $currency units on this media, only to give it away a few years later. Music quality and accessibility has improved constantly as well as the devices used to experience it. Music like networking hasn’t changed just once, it’s constantly changing. DevOps discusses cycles, feedback loops and ‘design thinking’ concepts and these topics can be used to take your network through phases like the journey of music. The cassette was just a phase, the CD was a phase and vinyl along with (dare I say it), chamber orchestras. Back to networking, it’s sole purpose is to connect data to consumers. Consumption and generation, accuracy and range and use cases increase continually. Each phase of music has interoperability on a functional level. The cassette always went in to the carriage, even if the quality was lower by choice. It would only take one purchase of a poor quality cassette advertised as “high quality” to prevent the future purchase of any more.

There is nothing I love more than getting in front of customers, being at events and generally doing my bit. It’s a privilege and I’m super lucky.

Customers and vendors, I salute you. If you get the balance right, the eject button gets used and you supply cassettes to the customers. Get it wrong and you’re one final eject away from never being used again. High speed dubbing? Let’s figure that one out.