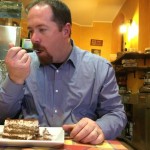 Commonly known as the biggest networking/’networking’ event in the industry for Europe, Cisco Live has something for everyone. Some great breakout technical sessions, meet the engineer, the World of Solutions and of course this year, the DevNet hall that also had a weekend hackathon which this blogger would have loved to have taken part in.

It was pretty obvious (you would have to be blind and deaf not to notice) that whilst walking around the Milano Congressi venue that houses the event, that Cisco have cottoned on to the idea that a copy and replace of product names to ‘software defined <$PRODUCT>’ is a bit of a unique to them tide turner. There are only so many ways problems like ‘resistance to change’ and the ‘adoption of technology to a risk averse’ industry can be addressed. If everything is based on the same naming schema, then the problem becomes less of a thing. Even if people use the same product they used before with a different name, guess what, it’s now software defined and the maturity cycle is already under way. Clever move. Not that I appreciate new startups calling everything software or hardware defined. Yikes. It’s software that runs on hardware of some description.

What did you take from Cisco Live Europe 2015? Good question alternate me. Cisco have traditionally lead things in the networking industry and it’s apparent that with acquisitions like Meraki and Tail-F, they have to become a software company to survive. It wasn’t any surprise to hear Cisco staff referring to the business as a software company and it’s a strategy that I for one think will win. First comes the painful transition to software terms using the ‘software defined’ mechanism. Sure it’s marketing, but a mindset and institution has been built by Cisco 1.0 that now needs to morph in to 2.0. They have a tough job along with the rest of the industry. Turning a large ship is difficult. An armada? Strategy is king.

In order to move a traditional network house to a software house, including the whole partner ecosystem painfully crafted and optimised over years of effort, it takes a powerful strategy and the whole company to tow the line. That was certainly the message I saw and heard, loud, clear and in high definition. The DevNet hall at Cisco Live is new for 2015 and the success and popularity of it is ‘proof in the pudding’. Many of the stands in the DevNet hall were a common talking point bringing strangers together in the lunch hall, in break out sessions and on the floor at the ‘World of Solutions’.

The show was a great reminder and acknowledgement that despite the winds of change and the effort to enhance the networking institutional mindset, time proven and much loved protocols like BGP are still king. I certainly had a great fuzzy warm feeling when I saw how packed the ‘advancements in BGP’ session was! Great! Just as a side note, Twitter is a terrible medium at the best of times for expressing emotion and sentiment. My Tweet about that session was wholly misunderstood and I’m an advocate, heavy user and lover of the BGP protocol. It is the time proven, extendible and much loved wheel of networking. Long live the king. We might steer it in different ways and sometimes forget that it’s there, but where would we be without it.

Appreciating this article is dancing about a bit, let’s wrap things up:

Cisco are trying to make software seem ‘normal’ to network types, introducing concepts that are the equivalent of MAC addresses and VLANs to us for familiarity. How can we think in terms of code if we don’t know the basics? A good plan and one that many podcasts and articles have been written for including this one: Programmability 101 with Ivan Pepelnjak and Me! A viable plan for Cisco is to ‘flood’ the concepts out backing them with tangible products and learning material. I’m impressed and I’ll go ahead and say ‘good job’, although there is always work to do. Networking engineers love to play, lab and tinker. Enable that and the market will leap forward. VIRL and the [DevNet learning tools](http://developer.cisco.com](https://developer.cisco.com/site/devnet/home/index.gsp) are a great combination.

Personally I would like to see enforcement of ‘this isn’t new, all it takes is a side step to understand’ type promotion. Sure, it might take away some of the excitement but it removes some of the fear and developer job type questions being bandied about. Cisco went to great effort during CLEUR 2015 to provide really useful sessions but I felt as single components sometimes the importance and relevance of them wouldn’t make much sense to network engineers, designers or implementers. Maybe for the next one, Cisco could provide a ‘learning curriculum’ for the show so visitors receive a structured experience that makes sense. For example and just to back this up, a friend and myself attended a DevNet session on microservices. I was curious to see how Cisco were presenting the concepts and my routing and switching CCIE friend took some thought provoking knowledge away he didn’t have before, or did have but didn’t know how to place it. He wouldn’t have attended this session though as the awareness mechanism isn’t quite there yet.

Make sure you know the difference between scripting, network automation, programs and controllers. They are all different but similar enough to cause headaches. As software type people who work in networking, it’s all too easy to say things like ‘forget scripting, you can’t maintain it’, but when scripting is taught, it goes against modern gospel of ‘don’t do it’. Actually you’re using scripting to speed up your current job, it’s maybe not how you would do the next generation of tasks. It’s all a game of semantics however and all of it is valuable. Re-usable coding techniques, {{TEMPLATES}} and managing a development environment are seriously important. Whether you write scripts or maintain microservices, managing your code, versioning, code sign off and bug management are king. It can be the difference between a ‘sellable’ service helping the networking industry transform one step at a time or becoming that gal or guy who doesn’t sleep due to bad practices. Be valuable, scale and have a life! Sound good?

Make sure you check out Cisco’s developer site: http://developer.cisco.com, follow the tutorials and have fun! If you’re absolutely fresh to this kind of thing, check this tutorial site out which is also on the Cisco developer site.