There are many arguments which may define how successful a project or rollout will be. Some claim success is down to the sales force, engineers will argue it’s down to pre-sales coupled with technical skill and project managers will claim they’re the pivotal element. Fact is, it’s a well oiled combination of this gear set that meshes together to produce the outcome. Broken gears can either be repaired or replaced. Sometimes it’s politically difficult to replace gears due to the HR cobweb of red tape which we all live with day to day so a quick mend may be the only choice. With all of the politics and dictatorship of an enterprise put to one side, we often get met with the following two step process:

You may wonder the meaning of b) and why I also said two step. Phase c) never gets hit. Ever. Nada. Zip. Never. Enterprises like thermal laws of electronics, always run hot. It doesn’t make sense to have more staff than you actually need to perform a task. As a result, when a team is busy, it can feel like no one else can be as busy as you.

Pre-sales can also bring its difficulties. Poorly performing or over stretched departments will fiercely fight any external involvement. If engineers are inept, incapable or incompetent at their jobs, they probably know it and do not want exposure to north bound management. Being humble in these situations pays dividends in the future. Unexpected contracts have been awarded from the simplest of acts and sentiments. In terms of pre-sales, below represent most of the memorable statements and questions I have dealt with in the past:

But what we have works now right? Doesn’t it? Isn’t there a baby step we can take? We only bought this three years ago and we need to make more money from it It works fine for me, what’s the issue? We didn’t have this issue with our older L2 network What’s wrong with ATM? I can understand replacing servers, but why the network? It’s just a piece of wire. They wouldn’t put gigabit ports on the box if you couldn’t go up to gigabit speeds Our hub works just fine. It’s quick and the network relies on it We have lots of dark fibre, we don’t need anything fancy. 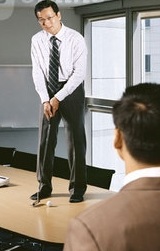 To help cope with these questions, I present to you an analogy. I look at a traditional business like a fence going off into the Devonshire countryside. Techies sit on one side and commercial sit on the other. Times are a changing folks. Techies are now in a position to cross both realms and ensure technical correctness in commercial land where the grass is commission-ably greener.. The days where a swanky looking bloke in leather driving gloves pulls up in his golfing Porsche has long gone (mostly). As a technical consultant, delivering education as part of pre-sales should be part of your day to day activity set. If it isn’t, it’s time to introduce it. You can thank me after!!! If decisions are to be made by being informed, deliver the correct information. Simple?

Every year sees some new technology claw its way up the ranks and it’s nigh on impossible to attempt to know everything. You have two choices; wide and shallow, or narrow(er) and deep(er). It’s easier to be able to locate information quickly than memorise it. Better to deliver clear, concise information than second hand and even second guessed tidbits you heard flung around in the office. Being able to cross the fence means keeping a balance of technical know-how and commercial awareness. Cisco have been pushing business awareness for a LONG time (PPDIOO ring a bell?) with it’s educational delivery system and Juniper have e-courses around business acumen. It’s no coincidence the vendors we work with every day are now trying to turn us into consultants and not just engineers. It makes our lives easier, projects more successful and the business you represent more profitable.